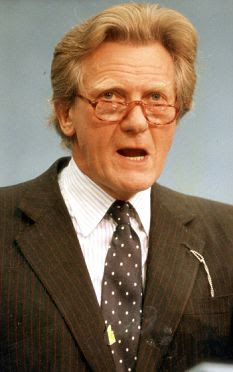 Last night I watched a TV show about advertising in the UK. And guess what came up big time but Satchi & Satchi, that institution much loved of the Tories and often credited with keeping Thatcher in power for the entire 1980s.

Who should we see bumping his gums on there but that Michael Heseltine, when it came to the section on advertising the great sell off of the UK family silver that was privatisation. And the multi million pound campaigns used by the Tories to pursue their own political agenda. Which was to all intents and purposes to hobble the power of the unions by whatever means necessary.

Of course Heseltine was in fine fettle frothing away like a singing kettle reminding us all of what a fabulous idea it was to off load the nationalised industries at bargain basement prices in order to create the utopia that is a share owning democracy. Of course Michael, like most Tories, lives in his own version of cloud cuckoo land when in actual fact the real world was much more sordid and grubby.

The state sanctioned sell off of national assets has to be one of the times in this countries (the UK) sordid history where the very worst of motives and traits came to the fore. Everybody who could joined in the carpet baggers charter and cashed in by buying up shares in what had hitherto belonged to everybody, and selling them off after less than a week at an enormous premium. Even the most rabid socialists where there in the queue desperate to tell hissing Sid to make sure they got their quota of British Gas shares.

What we are all forgetting is that these state monopolies had before privatisation belong to every man, woman and child in the nation. What the Tories did was to take our property and sell it back to those of us who could afford it at rock bottom prices to enable us to then cash in by selling them on to international conglomerates at a price greatly inflated to that which we paid. That was of course all well and good for those that had money to spare, but millions didn’t and they were effectively robbed.

Did we end up as a shareholding democracy? No we didn’t the shares were quickly sold on and are now all held by foreign corporations like Santander. Thanks a lot Satchi & Satchi.
Posted by Munguin at 12:59

Email ThisBlogThis!Share to TwitterShare to FacebookShare to Pinterest
Labels: if you see sid tell him, Michael Heseltine, Rail privatisation, Satchi and Satchi