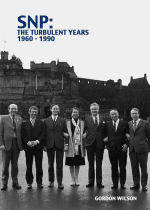 I have recently obtained a copy of Gordon Wilson’s new book: SNP The Turbulent Years 1960-1990. It certainly looks very good and I suspect it will be a must for those of you interested in this subject. (Published by Scots Independent (Newspapers) Ltd.)

Particularly the thorny issue of how the SNP supposedly brought down the Callaghan Government and allowed Thatcher in and of course 18 years of Conservative rule. Never mind the fact that in all the elections since 1979 people must have voted for someone. Clearly the majority of Scots voted Labour, but how effective where Labour as an opposition from 1979-1990 and who threw away the 1992 General election? Also who stymied the 1978 devolution referendum with an unworkable 40% minimum? Who sat on the McCrone Report?

Gordon’s book reveals that in voting patterns for the period of 1977/78 the SNP voted with the Government 63.2% of the time. That is despite the fact that the Labour Government were busy shafting the Scots behind the SNP’s back, looking at frankly ridiculous ways of stealing Scotland's oil by continuing the diagonal SW-NE border through Berwick, thus putting a large proportion of the oil on the English side and by encouraging the Orkney and Shetland Isles to ceded from Scotland (and become English I suppose???) thus losing us a whole pile more oil. So thanks very much Jim Callaghan (not so Sunny Jim if you lived in Scotland clearly) and Harold Wilson.

If you want to read the book you can get it here:

http://www.snptheturbulentyears.com/
I am a very slow reader so it will take me a bit of time to do a full critique, so if anyone has already read it I would love to hear what you think of it. If not you can watch this space.


The photograph shows from left to right: Ian MacCormick; George Reid; Gordon Wilson; Winnie Ewing; Donald Stewart; Hamish Watt and Douglas Henderson (and if you don't know who these people are well go look them up on Wikipedia).
Posted by Munguin at 08:53