DANNY ALEXANDER AT THE SCOTTISH OPEN 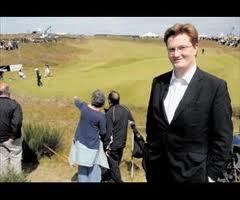 Danny Alexander is a great fan of golf, and just to prove it here he is (above) at the Scottish Open, where he appears to have got into the swing of things by donning a lounge suit and taking off his tie. He fits right in don’t you think?

Some of the more cynical among us might say that this is a cynical ploy by the MP for Inverness, Nairn, Badenoch and Strathspey to implement a policy of damage limitation after he claimed responsibility (indeed he was proud of it) for the Tory led coalition’s cynical tax grab that robbed £2 billion a year from the north east economy so that English motorists could have 1p off a litre of petrol. A tax drop that was wiped out in a matter of days as prices at the pump continued to rocket. Never mind! Danny has now taken great pride in implementing a £50 million a year U-turn that will give tax breaks to those exploiting the more marginal fields. You don’t have to be Chief Secretary to the Treasury to figure out that £2 billion minus £50 million is still a huge £1.95 billion hole in the north east economy. No wonder Danny has whizzed off to the Scottish Open to do a bit of glad handing. I’m amazed he has not claimed full responsibility for bringing the Open to Inverness.

In other Lib Dem related news failed Fife MP and leader of the Lib Dem groupette at Holyrood, Willie Rennie has been bumping his gums in the press again. How is it that with only five MSPs (less than the Greens or the SSP in 2003) Rennie manages to get so much media coverage when we really ought to be ignoring him and his “party”. This time he is getting all het up about Alex Salmond encouraging erstwhile Lib Dem voters to come over to the SNP, with more or less everybody else. Willie seems to think that Alex is poaching his voters. Willie if they don’t vote for you any more they are not really your voters!
Posted by Munguin at 11:15